Airpush, a mobile ad network that is only two years old, has quickly grown to one with over 5,000 advertisers. One thing they’ve heard from that sea of advertisers over the past 12 months, and especially over the past six, is that real-time bidding (RTB) capabilities are now a must. To answer those needs, the company today unveiled AirDSP, a platform meant to easily connect advertisers to RTB exchanges.

Asher Delug, Airpush founder and CEO, told RTM Daily, “AirDSP is a mobile demand-side platform (DSP) where a self-serve advertiser can access all of the mobile RTB exchange inventory from a single interface.” He noted that while mobile RTB has really started to take off, “the vast majority of mobile advertisers are not set up for it.” He believes most are still traditional self-serve advertisers, so how do you get them involved in RTB?

When asked if advertisers have been shying away from mobile RTB not because they don’t like the idea of it, but because the technology is too daunting, Delug said, “100% yes.” As a result, Airpush has spent the past eight months building the connections between their network and the exchanges as well as creating a bidder script to make everything easier. “From a self-serve advertiser’s perspective, it really just feels like you’re building a banner campaign,” he claimed.

“The barrier for entry has just been too high,” he argued. Between the engineering time (creating the bidder, the algorithm, fine-tuning it, etc.) and the logistics (who to partner with, the behind the scenes contracts with the exchanges), it’s no wonder that some advertisers – especially smaller ones – haven’t gotten into the game. Delug hopes that AirDSP will change that and allow “any old Joe advertiser [to] not only compete in the market, but compete effectively.”

Included with the AirDSP launch is the launch of Optimizer, a tool which Delug is excited about. The patent-pending tool gives self-serve advertisers bidding precision on par with that of programmatic advertising, Delug claimed. It allows them to look at campaign stats and manage things like bids, creatives, and landing pages independently.

Airpush has partnered with Inneractive, MobClix, MoPub, OpenX, Smaato, and others for AirDSP. 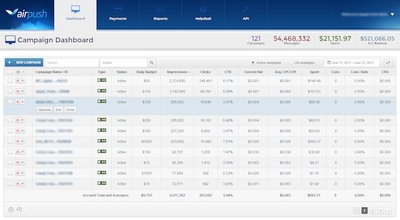