The Interactive Advertising Bureau (IAB) and its Mobile Marketing Center of Excellence, IAB Europe, and IHS Technology revealed today their global figures for mobile advertising revenue which surged 64.8 percent to $31.9bn (€23.9bn) in 2014 from $19.3bn (€14.6bn) in 2013, driven by continued shifts in consumer usage patterns and industry innovations. 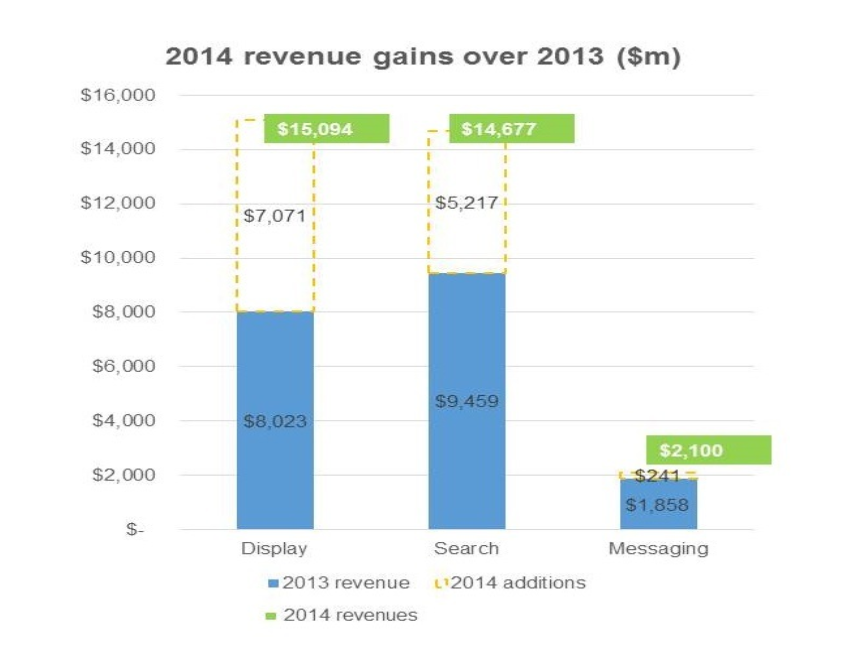 Growth year-over-year was led by North America, which saw a 76.8 percent leap over the 2013 figures. All regions grew by more than 50 percent:

“Mobile devices are at the center of consumers’ lives across the globe and these numbers reflect brands’ increasing recognition that this medium holds great power,” said Anna Bager, Senior Vice President, IAB and General Manager, IAB Mobile Marketing Center and Digital Video Centers of Excellence. “Now is the time for the industry to coalesce on standards and guidelines to build even more momentum for mobile marketing around the world.”

“The Global Mobile Advertising revenue numbers demonstrate the strength of mobile both in Europe and globally and help us to understand the scale and opportunity it brings to digital as a marketing platform,” said Townsend Feehan, CEO, IAB Europe. “It’s important that advertisers, agencies and publishers fully understand consumer behavior as the differences between the devices diminish and the potential for engagement with digital content grows. IAB Europe continues to invest in research, education and training and the development of business standards to support digital growth.”

“Mobile yet again proves to be key to the continual evolution of the online advertising market. These numbers have been underpinned by the industry coming together to collaborate and create improvements to mobile advertising infrastructure,” said Daniel Knapp, Director Advertising Research, IHS. “Technology is now better explained, measurement is improving, and targeting is better aligned with other media to help advertisers reach and engage with their audiences.”

Market size is gross, defined as after discounts, before agency commissions. Global market sizing and format split is based on reported data by local IABs, and a statistical and econometric model. Reported data has been harmonised to adjust for discounts and agency commissions. Modelled data is based on variables such as smartphone penetration, 3G subscriptions, messaging volume. The model has been refined based on benchmarking variables such as ad spend per capita, mobile subscriptions and 3G/4G penetration as well as through interviews with key players across the mobile advertising ecosystem. Model also takes into account typology of mobile ad markets in terms of maturity and format proliferation.  All data expressed in constant 2013 USD. Conversions into EUR based on 2013 USD-EUR foreign exchange rates. Constant currency is used to eliminate exchange rate effects on growth rates.

The Interactive Advertising Bureau (IAB) empowers the media and marketing industries to thrive in the digital economy. It is comprised of more than 650 leading media and technology companies that are responsible for selling, delivering, and optimizing digital advertising or marketing campaigns. Together, they account for 86 percent of online advertising in the United States. Working with its member companies, the IAB develops technical standards and best practices and fields critical research on interactive advertising, while also educating brands, agencies, and the wider business community on the importance of digital marketing. The organization is committed to professional development and elevating the knowledge, skills, expertise, and diversity of the workforce across the industry. Through the work of its public policy office in Washington, D.C., the IAB advocates for its members and promotes the value of the interactive advertising industry to legislators and policymakers.  Founded in 1996, the IAB is headquartered in New York City and has a West Coast office in San Francisco.

IAB Europe is the voice of digital business and the leading European-level industry association for the digital advertising ecosystem. Its mission is to promote the development of this highly innovative sector by shaping the regulatory environment, investing in research and education, and developing and facilitating the uptake of business standards. Together with its members – companies and national trade associations – IAB Europe represents over 5,500 organisations.

IHS (NYSE: IHS) is the leading source of information, insight and analytics in critical areas that shape today’s business landscape. Businesses and governments in more than 165 countries around the globe rely on the comprehensive content, expert independent analysis and flexible delivery methods of IHS to make high-impact decisions and develop strategies with speed and confidence. IHS has been in business since 1959 and became a publicly traded company on the New York Stock Exchange in 2005. Headquartered in Englewood, Colorado, USA, IHS is committed to sustainable, profitable growth and employs more than 8,000 people in 31 countries around the world.