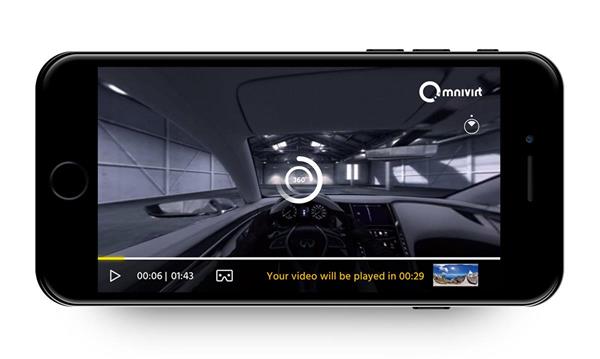 SpotX and OmniVirt today announce their partnership in powering 360° virtual reality (VR) advertising for brands. This partnership will bring OmniVirt’s 360° VR technology across all media owners on SpotX’s platform, giving marketers the ability to distribute their 360° VR content at scale.

Distribution has been one of the largest pain-points in the VR market today. Under the partnership, OmniVirt’s robust VR technology will now seamlessly integrate into the premium inventory available through SpotX’s platform. It will enable brands to promote and drive viewers to their VR experiences at unparalleled scale.

“Marketers and agencies alike have been creating 360° VR advertisements due to the promise this medium has for marketers to make an impact on their audience,” states Brad Phaisan, Founder and CEO of OmniVirt. OmniVirt 360° VR campaigns have shown a tenfold increase in interaction and engagement compared to flat 2D advertisements.

“In spite of marketers and agencies being extremely interested in VR, the biggest challenge for these marketers remains distribution and viewers,” notes Phaisan.

While publishers like The New York Times, Wall Street Journal, Discovery, and Time Inc, and brands like Toyota, ABC, Chick-Fil-A, and Universal Pictures have utilized OmniVirt’s proprietary technology to power 360° VR experiences for their campaigns, this is the first time that this technology will be available at such a large scale.

“The ability to bring these 360° VR experiences to audiences across SpotX’s platform is something both the buy and sell side are very excited about,” states Jeremy Straight, SVP of Strategic Partnerships at SpotX. “Our Demand Facilitation team will help buyers find the best media owners for 360° VR, and help them structure their buys to maximize efficiency and effectiveness of this innovative new format. The partnership reinforces SpotX’s commitment to media owners to explore innovative technologies that empower them to realize the full potential of their video ad inventory.”

Starting today, any advertiser, brand, or agency that has 360° VR content can now leverage the integration between SpotX and OmniVirt to deliver their VR experiences at unparalleled scale.

OmniVirt is 360 Video and Virtual Reality advertising platform founded by former Google and YouTube employees. The company has received funding from top venture capitalists including Andreessen Horowitz, Greycroft, BDMI, Horizon Media, First Round Capital and many others. OmniVirt’s technology distributes 360° VR advertisements through existing exchanges and networks. These experiences are customizable and interactive, with detailed performance reporting showcasing where audiences are engaging in the immersive experience. The company has powered multiple high profile campaigns for clients like Toyota, Infiniti, Samsung, Chevron, and Johnnie Walker with publishers like the The New York Times, AOL, Time Inc, Wall Street Journal, Vice Media and more.