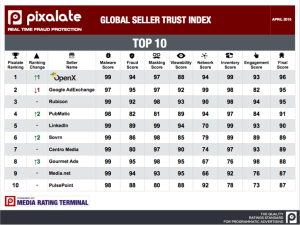 “The lack of trust in the marketplace can have significant revenue implications as poor quality traffic dilutes the worth of superior publisher inventory. In a transparent and safe Ad Exchange, buyers can bid with confidence, resulting in higher bids. At OpenX, we’re committed to providing both publishers and advertisers with a safe and transparent marketplace to buy and sell inventory.” said John Murphy, Vice President of Marketplace Quality.

In March of this year, OpenX launched the next generation of its proprietary Traffic Quality Platform, a significant advance in its ongoing campaign to eliminate fraud in programmatic advertising. For the first time in the industry, OpenX’s new system enables an exchange to extend fraud detection techniques to the browser.

The new features, uniquely leveraging OpenX’s direct tag integrations with publishers, build upon OpenX’s existing platform, which detects and blocks suspicious activity mainly through big-data analysis involving the gathering and evaluation of vast amounts of transaction data. The end result is a fully integrated platform that addresses all major risk factors for advertisers through a combination of rigorous human review and sophisticated automated systems.

The monthly Global Seller Trust Index is based upon Pixalate’s proprietary technology that analyzes more than 100 billion monthly impressions and delivers ratings based upon inventory quality and ad performance. Global quality ratings are based on an analysis of overall effectiveness assessing malware, viewability, fraud, engagement, domain masking, and inventory scores in compliance with recognized industry standards.

To access a free copy of the Pixalate Global Seller Trust Index including the methodology, please visit: http://www.pixalate.com/sellertrustindex/


OpenX is focused on unleashing the full economic potential of digital media companies. We do this by creating highly efficient, high quality programmatic advertising marketplaces that deliver optimal value to all buyers and sellers of digital advertising.

Today, OpenX is recognized as the highest quality independent exchange, and we operate some of the largest and most efficient programmatic markets in the world. Our single stack system encompasses a complete supply side platform powered by the unique OpenX Demand Fusion technology that merges network and Real-Time Bidding, and a comprehensive ad server.

At OpenX we have built a team that is uniquely experienced in designing and operating high-scale programmatic ad marketplaces. We are constantly on the lookout for thoughtful, creative executors who are as fascinated as we are about finding new ways to apply a blend of market design, technical innovation, operational excellence and empathetic partner service to the frontiers of digital advertising.

OpenX is headquartered in Los Angeles, with supporting offices in England, Germany and Japan.