Workouts are about to get a lot more rewarding: Kiip is delighted to welcome leading fitness-tracking app RunKeeper to its moment-based rewards platform.

This integration marks the first time RunKeeper has incorporated advertising into its app. With a growing community of more than 34 million users around the world, RunKeeper has a mission to encourage healthy and active living for everyone. The app encourages users at every stage of their fitness goals and progress. With this partnership, RunKeeper will now offer rewards powered by Kiip to congratulate users on their fitness achievements – taking motivation to another level.

“Our experience has been ad-free for a long time, as we have not wanted to disrupt the consumer experience,” said RunKeeper CEO & founder, Jason Jacobs. “Kiip is different, as their rewards add that extra incentive to motivate our community, and recognize users’ most impressive achievements.”

“Each reward is built into the user experience and true to the RunKeeper brand,” said Kiip CEO Brian Wong. “RunKeeper leverages Kiip’s technology to give users the extra motivation to run faster or go the extra mile. By enabling brands to own millions of point-of-sweat moments, Kiip adds value to people’s daily fitness routines through natural rewards.” 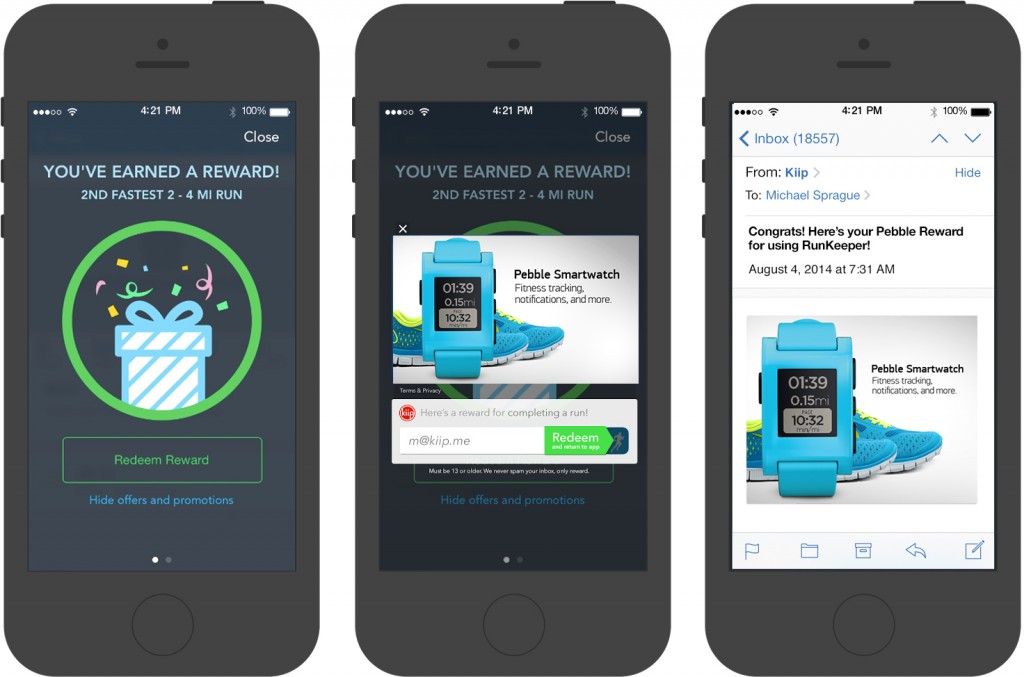 Kiip looks forward to pursuing additional opportunities with RunKeeper on connected devices beyond the smartphone, with smartwatches, smart scales and more. It’s part of Kiip and RunKeeper’s mission to promote active living.

Get RunKeeper on iPhone or Android.

Rewards lead to higher engagement among users and better monetization for developers. 84 percent of mobile users say they prefer mobile rewards vs. ads, and over 3,000 games and apps already use Kiip to monetize. Learn more about Kiip at kiip.me/developers.