Smaato, the leading global real-time advertising platform for mobile publishers and app developers, today expanded its industry-leading publisher platform, SPX, to include a super-simple native advertising builder and private marketplace functionality. These two features are on the forefront of mobile advertising technology, and now will be integrated into Smaato’s platform, which is already the largest independent, globally-focused mobile exchange. Smaato is beefing up its real-time advertising platform to give more control to its 90,000+ mobile publisher and app developer partners, helping them boost monetization in the busy Q4 season.

Obtrusive advertising is a death sentence for nascent mobile publishers looking to monetize: bad creatives can kill mobile advertising. Meanwhile, native advertising on mobile is seen as the most effective way to unobtrusively connect with viewers. These ads drive four times higher click through rates than mobile banner ads and are viewed 53 percent more frequently by consumers. With Apple allowing ad-blocking extensions for Safari in iOS 9, launching this week, creating mobile ads that offer a seamless, pleasant experience for mobile users has never been more important to the mobile advertising ecosystem.

With Smaato’s “point-and-click” native mobile ad builder – the first fully-functional native ad builder for mobile publishers – these ads can be created more easily than ever. Publishers are empowered to build native ad campaigns in a variety of formats and sizes that they know will look best in their apps or websites and connect with their audiences best.

“In the mobile advertising industry, the mantra is innovate or lose,” said Ragnar Kruse, CEO and co-founder of Smaato. “We’re constantly looking for ways to improve the mobile ad experience – whether that’s by improving the relevance and aesthetics of ads, eradicating mobile ad fraud or helping maximize the revenue mobile publishers make from their ad space. We want to give our 90,000 mobile publishers every tool they need to be successful – and today, we took a huge step in that direction.”

Not only can publishers choose how their mobile ads look and feel, with today’s announcement they’re also empowered to choose how these native ad campaigns are sold in the Smaato exchange – and thus strike more premium, high-revenue deals. With the private marketplace functionality, Smaato’s publishers can assign inventory to a certain number of programmatic buyers, allowing them to compete for the impressions in a private auction. Of course, they are still able to select a preferred deal buying model, in which the publisher sets up a first-look, fixed price, pre-auction deal for a particular buyer.

Smaato is also improving how it makes video ad buying programmatic by certifying VAST-compliant video inventory, and allowing it to be monetized via private exchanges or in the open market.

Smaato serves up to 6 billion ads each day, across 600 million unique monthly mobile users around the world, and works with 90,000 mobile app developers and publishers. To learn more about Smaato’s solutions for mobile publishers and app developers, please visit: www.smaato.com. 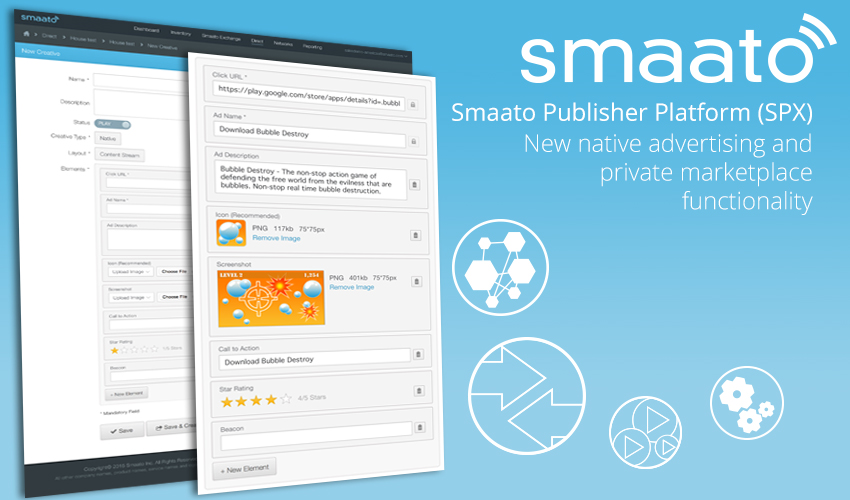 Smaato is the leading global real-time advertising platform for mobile publishers and app developers. Smaato runs the world’s largest independent mobile ad exchange and has been pioneering innovative, mobile-first solutions for publishers since 2005.

Smaato’s publisher platform, SPX, is a global, intelligent, and free to use self-service platform. SPX was built to solve the mobile monetization challenge for over 90,000 mobile app developers and publishers. The company’s worldwide reach and extensive network of demand partners provides a massive inventory of advertisers with one single integration. Smaato manages up to 6 billion ads every day around the world, across over 600 million mobile users each month.

Smaato’s global headquarters are in San Francisco, California. The privately held company was founded in 2005 by an experienced international management team. Smaato’s European office is in Hamburg, Germany. The APAC office is in Singapore. Learn more at www.smaato.com.