Television fans today no longer passively watch their favorite shows. They use their phones and tablets to actively discuss and engage with content about the shows they love while they air and throughout the week between episodes. Facebook plays host to a global TV conversation in part because fans enjoy discussing shows with the people who matter most to them.

Facebook has also become one of the best places for TV networks and show creators to connect with and build a community of fans. That’s why we’re pleased to announce a new alliance with Nielsen as they work toward an industry-standard metric that captures the total social conversation around television.

Today, Nielsen is announcing an expansion of the Nielsen Twitter TV Ratings to include Facebook conversation data for the first time. This new rating will become Nielsen’s “Social Content Ratings.” Social Content Ratings will measure conversation about original video programming from TV and over-the-top streaming providers. The new ratings will measure social media conversation during linear airtimes as well as on a 24-hour-a-day, seven-day-a-week basis. There are also plans to include Instagram in this rating in the future as well.

As more and more of our TV partners explore new and creative ways to engage with fans during and after the broadcast, it’s critical that they are able to measure and analyze their efforts. Nielsen’s Social Content Ratings are a part of Nielsen’s effort to measure the total audience across screens and platforms. This standardized measurement will help our partners create even better experiences for their most passionate fans, and that’s really exciting to us.  You can read more about the news on Nielsen’s site here.

In August, we found that Facebook usage in the U.S. peaks at the same time as TV viewing, in the evening during primetime. Today, we’re also releasing new insights that highlight how many people were active on Facebook during primetime hours over the course of a week. At the beginning of the current TV season (Sept. 21-27), we found that Facebook usage, based on the number of people who were actively engaged in their News Feed, peaks in many countries around the world—including countries where the Social Content Ratings will be available— during primetime on every day of the week. Here are charts for several different countries around the world: 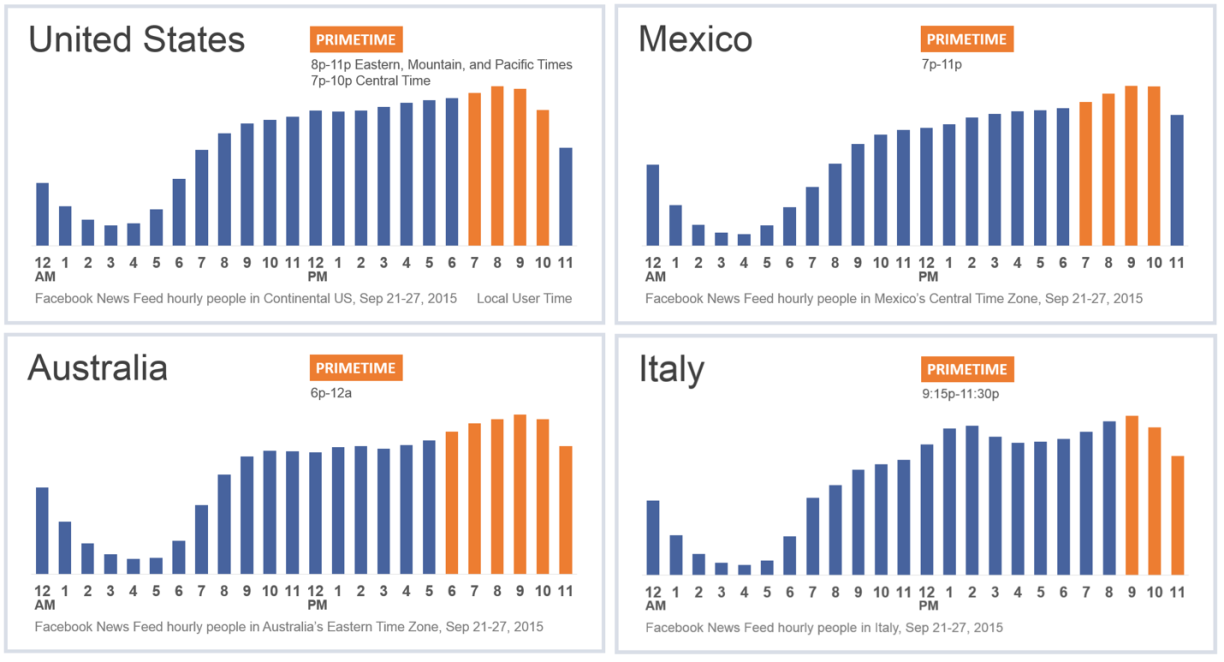 Keep the Conversation Going
Nielsen’s Social Content Ratings will measure the topic data about a program beyond the live broadcast window, which is an important part of the social TV story to understand. Fans are talking about their favorite shows on Facebook long after the live airing is over. As an example, we looked at the current season of ABC’s “Scandal” and found that while conversation about the show spikes on broadcast dates, 47% of interactions actually occur on non-broadcast dates: